I’ve been pleasantly surprised by the Twitter debate over my Guardian piece on the Washington Spirit derailing Megan Rapinoe’s protest last night. Granted, in nearly 30 years of journalism, I’ve resigned myself to a low bar. If I don’t have a high school cross-country coach running into the newsroom to yell at me about something I didn’t even touch or a gaggle of Alex Morgan fans threatening to kill me “twice” or buy my book to slap me with it, it’s a good day.

Low bar notwithstanding, I think people have raised some good questions. I’ve seen some tangential debate on why we play the national anthem before domestic sports events in the first place.

I've been saying this since day one. https://t.co/N2RwpJ57WI

As one Guardian commenter put it: “They don’t do that in Europe or in most other countries around the world. Only when there’s an international game are the country’s national anthems played. In fact at some football clubs like Dortmund, Liverpool and Celtic, they have their own “national anthems” i.e. You’ll Never Walk Alone.”

I read — and now I forget where, perhaps a message board somewhere — an interesting take pointing out that Rapinoe’s decision to kneel for the anthem, like Colin Kaepernick’s decision not to stand, isn’t starting a conversation about race relations. It’s starting a conversation about Megan Rapinoe and Colin Kaepernick. (To add to that point: I don’t even remember why NBA player Mahmoud Abdul-Rauf declined a traditional observance of the anthem. I just remember that he did, and it was controversial.)

When I mentioned that on Twitter, I got a couple of good responses that boiled down to “Whose fault is that?” The media’s? The athlete’s?

When Rapinoe first took a knee for the anthem, I was optimistic that the conversation would go beyond Colin Kaepernick — who, frankly, might not be the best person to lead the discussion. The one-time QB sensation has lost his starting job in San Francisco and may come across as bitter for reasons that have nothing to do with the nation’s problems with race. “OK, now someone else is doing it,” I figured. “Now it’s not just about Kaepernick.”

Last night, things changed. And if you hang out in my circles on Twitter, it’s pretty unanimous that the Spirit blew it. If you chat with people I know on Facebook or BigSoccer, including people whose politics would never be described as “conservative,” it’s a different story. 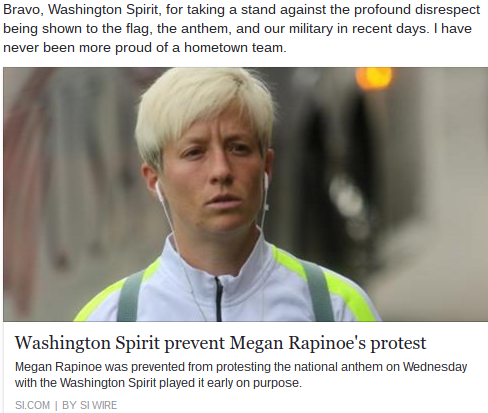 No, I don’t agree with that, as my Guardian piece should make clear. But within the echo chamber of women’s soccer fans on Twitter, I’m still going against the groupthink because I think Rapinoe undermined her own protest by calling Spirit owner Bill Lynch “homophobic.”

I also said it made little sense to use that term on someone who willingly bought a women’s soccer team and made a special effort to bring in players who were “out” well before Rapinoe was. Some people have challenged me on that point, saying the Spirit have been the only club not to go along with other NWSL teams on hosting LGBTQ Pride events or cheering decisions in favor of gay marriage.

One person decided to lighten the mood on Twitter.

But seriously, such litmus tests can be tricky. When the first Gulf War broke out in 1991, basketball teams raced to put American flags on their jerseys. Some refused to wear them because they opposed the war, and they were ostracized. Some opposed the war but wore the flag anyway. And veterans’ opinions were not as one-sided as one might think: Princeton coach and Korean War veteran Pete Carril was outspoken in defense of players who were not wearing the Stars and Stripes. (I can’t find any record of it, but I recall one of the last college teams to give in to the pressure to wear the flags was Duke, coached by West Point alum Mike Krzyzewski.)

Still, for sake of argument, let’s say Lynch isn’t as progressive on gay rights as the WoSo community would like. If I were the Spirit’s PR consultant, I’d be yelling at Lynch every day to follow the crowd on such things.

But is “homophobia” something Rapinoe should bring up?

Upon watching the video (see below), I found a subtle distinction. Rapinoe didn’t bring it up. It was brought up by Think Progress reporter Lindsay Gibbs, who asked about it (around the 11:15 mark).

So if you’d prefer to blame the media for sidetracking the discussion, fine. Blame Gibbs if you like (though it was certainly not her intent, and she couldn’t have foreseen Rapinoe’s blunt answer) for raising a question that wound up overshadowing the rest of the conversation as surely as the Spirit’s ham-fisted decision to reschedule the anthem overshadowed everything else last night. (Not that ESPN would’ve led SportsCenter with Crystal Dunn’s goal under any circumstances, but still …)

Not that Rapinoe had to take the bait. And she didn’t have to say she thinks Bill Lynch is homophobic in such direct terms.

The follow-up question tried to steer things back to race relations. And Rapinoe gamely tries to expound on it. But within a few seconds, she’s talking about being a woman and fighting for equal pay.

Rapinoe readily concedes that she doesn’t have all the answers. That is, as a lot of philosophers have said, the sign of a wise person. And I have to stress here that we’re looking at all of this — Lynch’s decision, Gibbs’ question, Rapinoe’s answer — with the benefit of hindsight. (I wasn’t even there. I had to coach a youth soccer team. Practice was canceled for the same reason the Spirit-Reign game was delayed, but by the time we cleared the field, it was too late to make the epic weeknight drive to the Plex.)

But we have to use this hindsight to ask whether Rapinoe’s protest is effective. As it stands now, it’s not. We’re not talking about race relations. We’re talking about Rapinoe, Lynch, homophobia accusations, overshadowing the Spirit’s big win (which wasn’t THAT big — they were likely to clinch a home playoff berth in the next week or so anyway), etc.

That’s absolutely not entirely Rapinoe’s fault. Nor is it entirely Lynch’s fault.

I wouldn’t even say it’s entirely the media’s fault. The point I tried to raise in the Twitter conversation that prompted this post is that it’s human nature to focus on what’s most controversial. I’ve been tweeting today about the Paralympics. I debuted a new feature finding interesting live sports around the Web. I retweeted the Landon Donovan news.

But guess what people want to talk about.

Like Rapinoe, I don’t have all the answers. I don’t know the next step. Should the entire WNT take a knee during the national anthem of their upcoming friendly? (My gut says that would backfire horribly on the grounds that when Rapinoe kneels as a member of the Reign, she’s making a point internally, but if she does so while wearing the U.S. uniform, she’s showing up her countrymates in front of others. As they said in Animal House, only WE can do that to our pledges.)

Should Rapinoe try harder to steer the conversation to race relations? Should the Reign, who have issued sharp, professional statements in support of Rapinoe without flinging mud at anyone else, establish a partnership with a group working to end racism?

So far, Rapinoe’s actions aren’t working. But that’s no reason to give up.

View all posts by Beau Dure